Interesting article on the continued supply challenges in the Industrial Market. 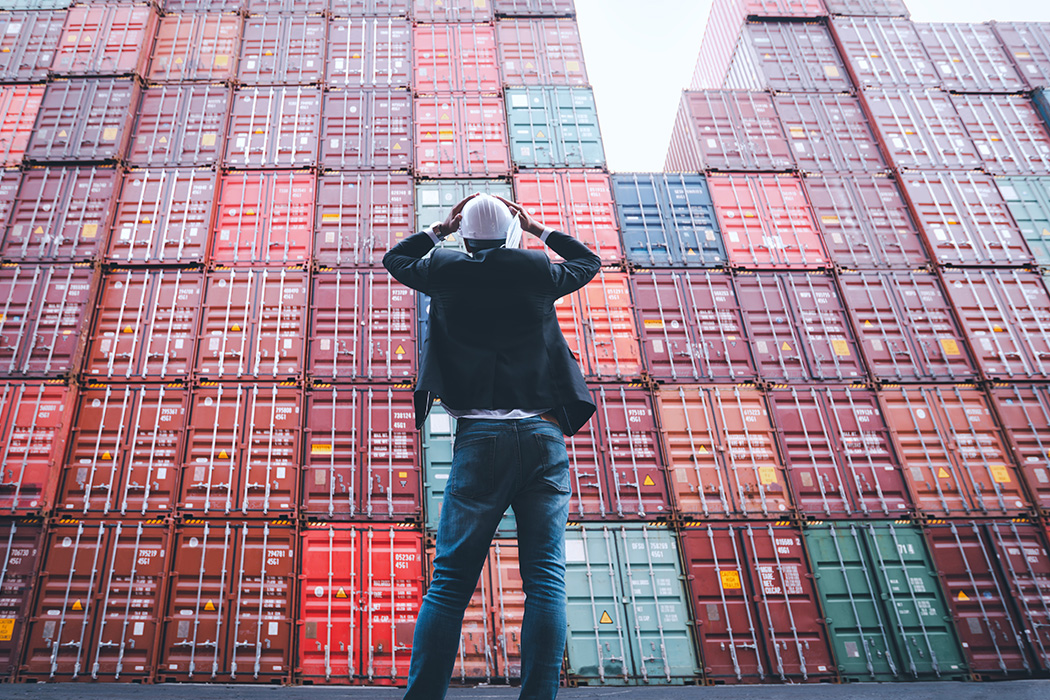 Despite skyrocketing construction costs, developers continue to build industrial product at a frantic pace to keep up with the unprecedented demand for warehouse space.

The precise origins of the ongoing supply chain disruptions that have resulted in global product shortages across the board are still being debated, but one thing is abundantly clear: the challenges are not likely to be resolved anytime soon.

“The biggest question in 2022 is, ‘When is the supply chain going to return to normal?’” says Ben Hackett, founder of Hackett Associates, which provides trade consulting services to the international maritime industry as well as the National Retail Federation (NRF). “The current backlog and congestion is getting much better, and the supply chain is on its way to returning to normal—the new normal—but it could shift again by June or July once goods start flowing normally out of China again.” (At press time, the port city of Shanghai had been shut down due to a new outbreak of COVID-19).

While many will point to the COVID-19 pandemic as the sole catalyst of the problem, there are a number of contributing factors, according to Robert Swinney, operations professor at Duke University’s Fuqua School of Business. “It’s not a single link that failed in a linear system,” Swinney said in a December 2021 webinar broadcast. “It is the response of a complex system to major changes in conditions. It appears to be a combination of complicated global supply networks and logistics processes that are being simultaneously strained at many different points.”

Swinney cites three major issues that led to the disruption: COVID creating a shortage of workers that reduced production capacity around the world, distortions to typical demand patterns due to changes in customer purchasing behavior (remember the panic-driven toilet paper shortage?), and the fact that manufacturing and logistics systems were often running at or near their maximum capacity even before the pandemic.

Because there was so little slack built into the global supply chain systems, the wide availability of vaccines that helped fuel the re-opening of the economy unleashed bottled-up consumer demand in the summer of 2021, and shortages, backlogs, and bottlenecks at the ports ensued—and persist today. One indicator of the severity of those shortages was that online consumers received 60 billion out-of-stock (OOS) messages between the two-year period from March 2020 to February 2022, according to a report by Adobe.

“Problems remain with clearing import containers to their inland destinations while export containers are still being held back due to lack of space at the terminals,” Hackett indicated in a March report released in partnership with the NRF. “Until supply chain problems are sorted out with more drivers, trucks, and inland storage space, we do not expect to see a rapid decline in the backlogs.”

From a commercial real estate perspective, the problems in the logistics ecosystem are compounded by the shift by occupiers of warehouse/distribution facilities from a just-in-time (JIT) inventory model—the practice of having just enough inventory on hand to fulfill orders—to a just-in-case (JIC) strategy that aims to minimize the probability that a product will sell out of stock. All of this has generated an unprecedented demand for warehouse/distribution space, with over 400 million square feet of industrial space anticipated to be absorbed in 2022, according to the NAIOP Research Foundation.

And while this has created massive headaches for the product distributors and consumers seeking their goods, it has created an enormous windfall for investors and owners of warehouse/distribution facilities, as well as the CRE industry as a whole. Average rents nationally for industrial properties soared to $8.82 per square foot in Q4 of 2021 and are expected to continue to rise, according to Newmark research. In turn, industrial sales volume reached a record $160 billion in 2021, besting the previous high in 2019 by 37.7%.

With increased demand and vacancy hovering around the 4% mark nationally—and half that in many markets—construction of industrial assets was at record levels across the U.S., with nearly 500 million square feet of product under construction at the close of 2021, according to Newmark. The construction boom comes despite the skyrocketing costs of building new industrial assets, which has risen by 13.6% from Q1 2021 to Q1 2022, according to a report by JLL. For warehouses specifically, those costs are up 21% during the same period. Exacerbating the problem is the shortages of construction materials, most notably steel, roofing, and insulation. In a study conducted by Statista, 95% of surveyed commercial construction contractors reported facing at least one material shortage. Steel availability may decline further if the war in the Ukraine is not resolved, as Russia is the world’s fourth-largest steel producer and Ukraine the 13th.

With shipping container traffic being re-routed from the West Coast to East Coast port cities like Savannah, Ga. and Charleston S.C., warehouse construction is exploding in those markets. “We’ve never had anything like this, it’s absolutely incredible,” says Mike White, SIOR, broker-in-charge with Charleston Industrial LLC. “The COVID-induced backlog at the West Coast ports was circumvented by coming through the Panama Canal and up the East Coast, where quite frankly, two-thirds of their goods were headed there anyway, only by rail and truck. This has been a decade-long evolution from West Coast to East Coast, but now it’s here to stay because shippers have found it to be as competitive to come to the East Coast directly than to deal solely with the West Coast.”

At the close of 2021, nearly 10 million square feet of industrial construction was underway in Charleston, representing 14.4% of the total market, according to CBRE. Like the rest of the country, Charleston is experiencing construction delays, in part because of material shortages, particularly roofing insulation for the “classic TPO-style industrial roof” and steel, according to White. “Some of the developers are being told by suppliers that they can’t give price quotes, and that they’ll give a price when it arrives onsite. That’s pretty remarkable.”

The construction delays have forced the industry to find creative solutions to help companies in the short term until the new warehouse facilities—many of which are being built on spec—are ready for occupancy. “As leasing brokers, we’re constantly calling existing tenants to ask, ‘Can you spare a bay, or release 10 or 20,000 square feet, or consider subleasing some of your space?’” says White. “And we’re advising clients that call us now (April 2022) to pre-commit today to a building that may not be ready until the fourth quarter…because there’s no rational reason for the demand curve to flatten—short of a major geopolitical disruption or a crushing recession.”

White says the port terminals are so overwhelmed that they’re ramping up the collection of demurrage (a charge payable to the owner of a chartered ship in respect of failure to load or discharge the ship within the time agreed), so companies are either redirecting the freight to other ports or they’re hiring a third party logistics (3PL), putting it in a container and leaving it in trailer yards found in rural areas located around the market. “It’s the craziest thing,” he adds, explaining that developers are taking excess land that may be constrained by wetland buffers and putting down concrete and asphalt decks to create trailer yards, “and those things are at full capacity across our market. Developers love it because it’s created value out of land that wasn’t bringing in any rent.”

Inland markets are also seeing construction booms, with Las Vegas being a prime example. There is currently six million square feet of new, mostly warehouse space underway in Southern Nevada, following a 2021 that delivered 6.2 million square feet in North Las Vegas submarket—87% of which was pre-leased—according to the Colliers Q4 report. The vacancy rate has plummeted to 2.3% from 6.2% at the close of 2020, despite the new inventory.

“It’s been wild. We’ve never had a vacancy rate this low and we’ve never built so much,” says 16-year veteran Amy Ogden, SIOR, senior vice president with Logic Commercial Real Estate. “We’ve always been a tertiary market and we’re becoming a top tier market. Las Vegas has never seen this kind of velocity. We’ve absorbed about 10 million square feet in the last year, and we don’t even have an existing 1 million square foot building yet.”

That is about to change as Ogden is currently working on two spec projects that will each deliver one million square foot facilities, and there are multiple projects in the market set to deliver buildings over a million square feet—both spec and build-to-suit. But demand is still expected to outstrip supply, “so we have our clients putting deposits down on construction materials while they’re still in the entitlement period,” says Ogden. “We also don’t quote any lease rates. Instead, we give a range, and we keep our delivery date as open-ended as we can, because it’s all getting pushed by at least two months right now.”

The COVID-19 pandemic accelerated consumer shopping habits, which in turn crippled the supply chain and drove up inflation, but the reality is that once the genie is out of the bottle, there doesn’t appear to be any way to get it back in. “Once consumers have gotten used to the convenience of on-demand, it’s not going to stop,” affirms Ogden.

Which means that resolution of supply chain issues may be a long way off.

This article was sponsored by the SIOR Foundation – Promoting and sponsoring initiatives that educate, enhance, and expand the commercial real estate community. The SIOR Foundation is a 501(c)(3) not-forprofit organization. All contributions are tax deductible to the extent of the law.